If there are not any technically feasible tasks to predict or prevent the failure in the work conditions, or they are not cost-effective, we must perform actions.

These tasks can be Run-to-Failure or Redesign.

- Run-to-Failure, only if the risk of the failure is in acceptable values and has not got safety or environmental consequences.

In these cases, we must prepare an emergency response to act once the failure has been. To design this response to the probability of the failure and the time between failures must be considered.

The redesign must be considered as a project, with financial, human and material resources that must be assigned, and must be time-limited. Finally, to check the redesign meets the targets should be checked.

The first result of the Logic Tree is a task, in this chapter we go to explain the different type of tasks that we can implant it in our RCM program.


On Condition Tasks, they should be our first option. They are defined as periodic or continuous inspections that are designed to detect potential failure conditions and allow corrections prior to functional failures.


To develop an On Condition task, the following questions must be addressed:


·    What is Functional Failure? It can normally be obtained from the RCM analysis; however, the additional definition of clarification related to the specific failure mode may be required during the development of the On Condition task.


·    What is the Potential Failure? It can be obtained from a study of the equipment work and environmental conditions.


·    What is the Potential Failure to Functional Failure (PF) interval; is it consistent? It can be obtained from the P-F Curve.

·       Can a task interval be developed that ensures the probability of failure is at an acceptable level (considering the consequences of the failure mode)? We can calculate the interval given the chance to develop in Functional Failure, according to the formulas:

·    Is it feasible to perform a predictive technique in that time slot? To choose the predictive task we can help further guidance provided by NASA.

We can calculate the costs to implant on condition tasks, considering the cost of inspection and the probability of not detect a potential failure, according to the formula:

1. Lubrication / Servicing: Cleaning, lubricating, charging, preservation, etc., of items/materials periodically to prevent the occurrence of incipient failures. It can be considered a failure in finding a task.

2. Testing (Operational, Visual, and Automatic): Periodically testing or checking out to determine serviceability and detect electrical/mechanical-related degradation. It can be considered a failure finding task.

3. Inspection / Functional Test: Periodically inspecting materials/items to determine their serviceability by comparing their physical, electrical, mechanical, etc., characteristics (as applicable) to expected standards. It can be considered a failure finding task.

4. Restoration: Periodically tasks to restore the design conditions of an item, it can include cleaning some elements a full overhaul.

Also, we can calculate the optimum maintenance interval based on the failure rate that we need to keep, according to the formula:

Exponential distribution, with failure rate l constant, the time-based maintenance is not recommended because to define the maintenance interval is not definable.

Finally, we can calculate the time-based maintenance costs, considering the cost of the task, the risk of failure due to the task and the probability of failure during the maintenance interval, according to the formula:

When the FMEA or COFA is finished, the maintenance tasks or actions must be chosen; to do it we will use a logic tree.


To choose the more appropriate task, the following factors must be considered:


2.    Cost-effective, in accordance with section 5.6.3 of SAE JA 1011, if two or more tasks are technically feasible the most cost-effective task shall be selected.


The next step is to design a logic tree that categorizes the failure consequences and provides a selection of failure management policies:


1.    Evident failure mode with safety or environmental consequences, the task shall assess the risk and implant tasks that reduce the probability of the failure mode to a level that is tolerable to the owner or user of the asset, in accordance with section 5.7.1.1 of SAE JA 1011.


3.    Evident failure mode with economic consequences, the direct and indirect costs of doing the task shall be less than the costs of the failure mode, in accordance with section 5.7.1.3 of SAE JA 1011.


4.    Hidden failure with economic consequences, the direct and indirect costs of doing the task shall be less than the costs of the multiple failure modes plus the cost of repairing the hidden failure, in accordance with section 5.7.1.4 of SAE JA 1011. 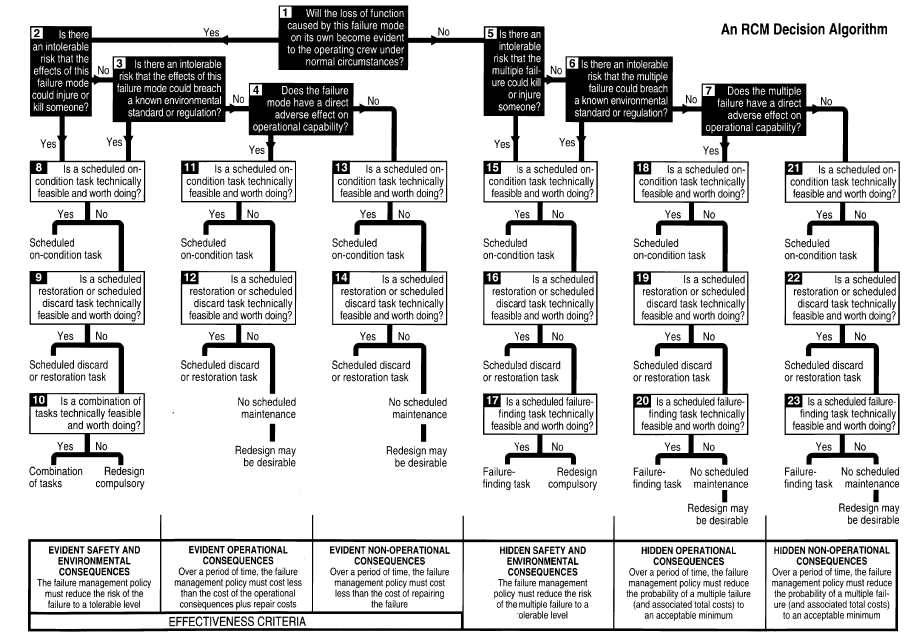 
Indicate that the Run-to-Failure components not scheduled maintenance is done.


We have seen that the results of the logic trees can be:


·     On-Condition based tasks, or predictive tasks, they can be done without move equipment, without stopping it or during a planned stop; they give information about the failure with time enough to plan reparations.


·    Time based tasks, or preventive tasks, they require to stop equipment and, usually, move it to a workshop; this task acts overall components, even those that don’t require maintenance.


·     Failure finding tasks, their mission is to find hidden failures, but they assume that find the failure is not immediate.


·     Tasks combination, when to implant only one task is not enough to reduce risk to reasonable values.


·    Run-to-Failure, it is the best solution when the risk is under acceptable values, because it uses all components of life.


·    Redesign, they can include equipment redesign as a process or operation redesign. Before proposing a redesign the complexity and time to implant them, the costs and the risk to no avoid the failure mode probability or consequence must be considered.