Base oils are the fundamental building blocks of a finished lubricating oil or grease, their properties and endurance are depending on their quality. Typically comprise 80 % - 90 % of the finished lubricant.
Every base oil meet a series of properties related to its chemical composition, the main ones are:
· Oxidation stability, degradation process by oxidative mechanisms induced by temperature.
· Thermal stability, high-temperature stability without oxygen.
· Carbon residue, solid residues formation, as soot, produced by high temperature.
· Natural solvency, capacity to solve chemical products, as additives or contaminants.
· Seal compatibility, base stocks should protect seals.
· Viscosity index, or viscosity-temperature relationship.
· Low-temperature properties, base stocks should have low wax content, because they have got a high poor point.
· Volatility, the tendency to evaporation, high volatility reduce flashpoint.
· Oxidation, corrosion, and rust, base oils should be water and acid-free.
· Colour doesn't influence the final result. Refined base oils are brown-amber colored, hydrotreated are yellow-golden colored, synthetic base oils are uncolored, and heavy-based oils are black-greenish colored.
· Toxicity, as much refined are the base oils as low toxicity they are, reaching even no toxic base oils.
· Biodegradability, high refined and synthetic base oils are practically biodegradable. The biodegradability is ensured by bio-based ester.
· Demulsification, the ability of oil and water to separate.
· Foam characteristics, the tendency to foam formation and the stability of the foam results.

Figure 1 Mineral base oils: (a) y (b) - Paraffin, (c) - Naphthene, (d) - Aromatic.
Mineral-based oils provide good lubricity and protection against corrosion, compatibility with seals and paints, natural solvency, hydrolytic stability, and low costs.
On the other hand, they have got a low flash point, high pour point, and low oxidation and temperature stability, so the range of operation temperature and duration is limited.
API (American Petroleum Institute, USA) classifies base oils by sulfur content, saturates content and viscosity index.
Usually, Group I base oils are produced by refining and dewaxing, but Group II and Group III are produced by hydrotreating, followed by dewaxing or wax isomerization.

2.  Re-refined Base Oils.
Used oils content wear metals, oxidation wastes, particles from combustion, fuel, water, and anti-freeze, so the oil should be changed, but the most of molecules of base oil are in good condition and can be used again. A re-refining process eliminates contaminants and additives to blend a new lubricant.
The regeneration process starts with a chemical treatment to bind wear metals and dirt to make their elimination easier. Next, the dewatering and vacuum distillation process removes water and lighter oils. Finally, a hydrotreating process introduces hydrogen to remove sulfur, nitrogen, chlorine and oxidation products.
The process produces Group I base oils and can reach Group II base oils by high-quality hydrotreating.

3.  Gas-to-Liquids (GTL) Base Oils.
Gas-to-Liquids is a process for converting natural gas into fuels and base oils, GTL process tears natural gas molecules apart and reassembles them into longer chain molecules. The result is extremely pure base oil, formed by iso-paraffin, free of contaminants such as sulfur, aromatics, and metals; that can be considered Group III or can be transformed to Group IV.
Iso-paraffin produced by the GTL process provides good viscosity properties, oxidation resistance, and good low-temperature conditions.

The more usual synthetic base oils are:
a.  Synthetic Hydrocarbon Fluids:
The SHFs comprise the fastest-growing type of synthetic lubricant base stock, they all are compatible with mineral base stocks.
Polyalphaolefins (PAO) are unsaturated hydrocarbons with the general formula (-CH2-)n, free of sulfur, phosphorus, metals, and waxes. Provide excellent high-temperature stability and low-temperature fluidity, high viscosity indexes, low volatility and compatible with mineral base oils. Although the oxidation stability is lower than mineral oils and their solvency of polar additives is poor, so usually PAOs are combined with other synthetic oils.
This base oil is recommended for engine oils and gear oils.
Alkylated Aromatics formed by alkylation of an aromatic compound, usually benzene or naphthalene. Provide excellent low-temperature fluidity and low pour points, good solubility for additives, thermal stability, and lubricity. Although their viscosity index is about the same as mineral oils, they are less volatile, more stable to oxidation, high temperatures, and hydrolysis. They are used as the base of engine oils, gear oils, and hydraulic fluids.
Polybutenes are produced by controlled polymerization of butenes and isobutylenes. Compared with other synthetic base oils are more volatile, less stable to oxidation and their viscosity index is lower; their tendency to produce smoke and shoot deposits is very low so they are used to formulate 2-Stroke engine oils, also as gear oils combined with mineral or synthetic base oils.
b.  Polyalkylene Glycols (PAG):
PAG are polymers made from ethylene oxide (EO), propylene oxide (PO), or their derivatives. Solubility in water or other hydrocarbon is depending on the type of oxide.
Both provide good viscosity/temperature characteristics, low pour point, high-temperature stability, high flash point, good lubricity, good shear stability, PAGs are not corrosive for most of the metals and compatible with rubber.
The main disadvantages are low additive solvency and pour compatibility with lubricants, seals, paints, and finishes.
They are used as a base for hydraulic brake fluids (DOT3 and DOT 4) due to their water solubility, 2-Stroke engine oils due to the low deposits at high temperatures, compressor lubricants, and fire-resistance fluids.
c.  Synthetic Esters:
They are oxygen-containing compounds that result from the reaction of an alcohol with an organic acid. They have good lubricity, temperature, and hydrolytic stability, the solvency of additives and compatibility with additives and other bases. But some esters can damage seals so require special compositions.
They are used as base oils for engine oils, mixed with other synthetic bases, because they improve low-temperature properties, reduce fuel consumption, increase wear protection and viscosity-temperature properties.
Also, as 2-Stroke engine base oils, they reduce deposit formation, protecting rings, pistons, and sparks. They allow reducing the quantity of lubricant from 50:1 of mineral oils to 100:1 and up 150:1 due to their outstanding lubricity.
Phosphate Esters are used as anti-wear additives due to their high lubricity and as base oils for hydraulic fluids and compressor oils due to their low flammability. But their hydrolytic and temperature stability and viscosity index is low and their low-temperature properties are poor. Also, they are aggressive with paints, coats, and seals.
Polyol Esters have good high-temperature stability, hydrolytic stability and low-temperature properties, low volatility and low Viscosity Index; the polyol esters also may have more effect on paints and cause more swelling of elastomers. To take advantage of their miscibility with hydrofluorocarbon (HFC) refrigerants, polyol esters are used in refrigeration systems.
d.  Polyethers:
In this group, we can find Perfluorinated Polyethers (PFPE) with a density nearly twice that of hydrocarbons, they are immiscible with most of the other base oils and non-flammable under all practical condition. Very good viscosity-temperature and viscosity-pressure dependence, high oxidation and water stability, inert chemically and radiation stable; these properties joined their shearing stability. They are suitable as hydraulic fluids in spacecraft and as a dielectric in transformers and generators.
Polyphenyl Ethers have excellent high-temperature properties and resistance to oxidation but they have fair viscosity-temperature properties, they are used as hydraulic fluid for high temperature and radiation resistance.
Polysiloxanes or Silicones have high viscosity index, over 300, low pour point, high-temperature stability, and oxidation stability so run well in a wide range of temperatures; they are chemically inert, non-toxic, fire-resistant, and water repellent, they have low volatility and are compatible with seals and plastics. Their disadvantage is formation of abrasive silicon oxides if oxidation does occur, effective adherent lubricating films are not formed due to their low surface tension, and also show poor response to additives. They are used are brake fluids and as antifoam agents in lubricants.
The table compares different synthetic base oils properties against mineral oil. 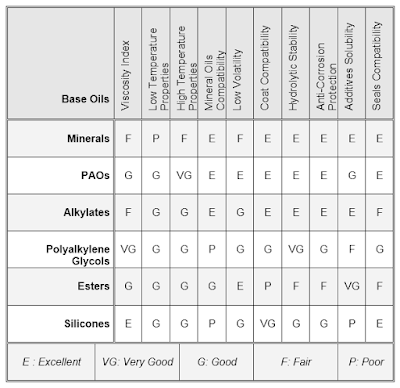 5.  Bio-bases Oils.
They are mainly produced from soybeans, rapeseed, palm tree, sunflowers, and safflowers. Their advantages are high biodegradability, superior lubricity, higher flash point, and viscosity index; but their pour point is high and the oxidative stability is poor, also the recycling is difficult.
The main applications are hydraulic fluids, transmission fluids, gear oils, compressor oils, and greases. Better when an application is total loss, indoors or where low pour point is not an issue, food industry or environmentally-sensitive areas.